You are here: Home / Design / The Tipping Point Review – How To Apply To Your Niche Step 8 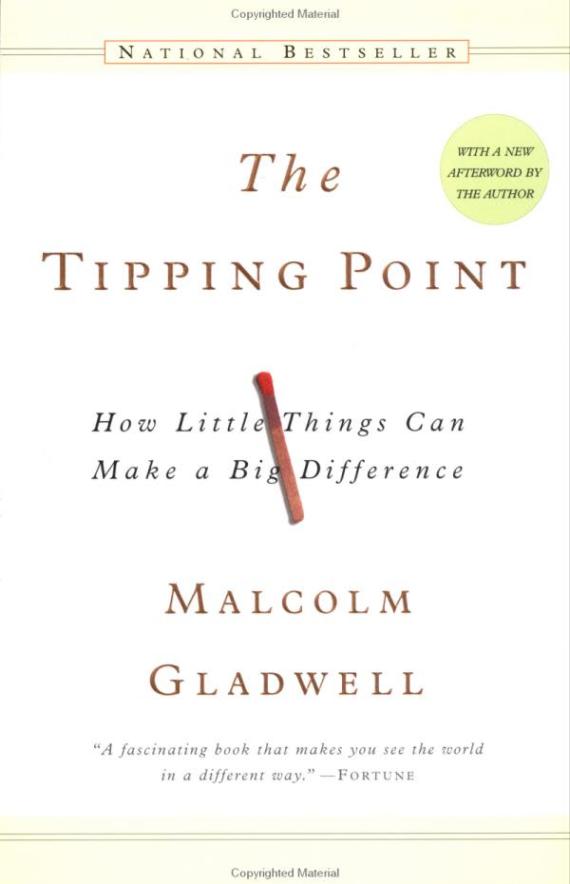 If you’re just joining us, we have been building an optimized website for Hudson Concrete of NYC. The site is going to be a business producing machine. We’re targeting lots of low competition, highly productive long tail keywords. I’m in a lull about the process until the site is built so I thought I’d get into some interesting tidbits I picked up recently. If you want to start at the beginning click here for Step 1. It takes about 15 minutes to catch up.

The Tipping Point by Malcolm Gladwell – A Review

The Tipping Point is a book about communication. Gladwell discusses Case Studies of  some extraordinary communicators in various periods of history who have been able to start epidemics.

If you are looking for proof that spreading the word can yield profitable results then this book is a must read. The question is how to be a good word spreader? Some people are really good at it. Some are just naturally effective at socializing and being extremely credible. As we’ve seen in life and what Gladwell says in the book, is that effective communicators seem to be average people.

The Story Of Hush Puppies

Early in the book Gladwell talks about the once popular Hush Puppies shoe brand. By the mid 1990’s the brand almost faded into oblivion. Sales were down to 30,000 pair per year. Then something happened. Some hip communicators in Manhattans lower east side started wearing them and they caught on. An ad agency was looking for a pair for a fashion shoot and they started taking off. Soon Hush Puppies became an epidemic. Within two years they sold 2 million pairs.

The Hush Puppies owners didn’t do anything differently. There were no expensive advertising strategies. It started with a small group or even a single individual who was a communicator. The word spread.

What Is The Tipping Point?

Gladwell provides numerous Case Studies and interesting research about what makes something spread. What is it that causes an idea to become popular by the masses? That’s the tipping point. The point at which something takes off. Gladwell does an excellent job of communicating inspiring case studies.

The Law of The Few

Gladwell discusses an interesting story about Paul Revere and the famous quote “The British are Coming”. Revere got word that the British were mounting a raid to seize weapons from the colonists. He sent his buddy William Dawes on a southerly route west of Boston and Revere took the northern route. It turns out that Revere was an effective communicator and Dawes wasn’t. Those along the northern route were ready for the Brits and those along Dawes route weren’t.

What we learn is that there are a small amount of individuals who are effective communicators.

Gladwell goes on to explain there are three types of people with social skills. Communicators who are good at linking others together. Mavens who are information specialists and Salesman who have unique persuasion skills.

He also talks about what makes an idea stick.

How To Develop The Tipping Point For Your Niche

The Tipping Point was published in 2000, 5 years before Facebook, Twitter and the social media epidemic. Websites were around, but in most cases they were online brochures.

Today all the tools like websites, blogs and social media are readily available enabling small businesses to become members of The Law of The Few Club. Whether a local business or one that go can regional or national, we all have tools at our fingertips that enable us to be communicators, mavens and salesmen in our niche.

It takes work and commitment to learn how to effectively use the tools available (and a willingness to fail before mastering), but the results can be life changing. Even in the depths of an ugly recession that doesn’t want to quit, small companies who have embraced the new technologies are getting all the business and growing while their competitors are whining that there is no business.

No matter what business you’re in, you’re in the marketing business first. Those who see this will discover the tipping point for their business.

The Tipping Point is a more timely read today that when it was first published. Gladwell should consider a sequel.

Edward Winslow
Founder & Owner at NicheQuest Media
Small business marketing veteran and founder of Nichequest. Ed's goal is to help small businesses position themselves to reach customers searching for solutions and services. He is a SEO Consultant, Reputation and Display Ad specialist to companies and agencies throughout the United States.

Enter your email to receive this post in PDF.

Outliers Review – What We Can Learn From Bill Gates – Step 10

How To Dominate Your Local Niche Market- Step 9

NicheQuest is an demand driven marketing agency and local search engine optimization company providing online local SEO marketing for small business in our home states of Connecticut and New York as well as for clients nationwide. Founded by small business marketing veteran Ed Winslow, our goal is quite simply to help small businesses position themselves online in order to reach customers searching for solutions and services.